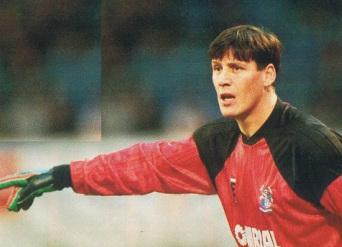 Born in Manchester, Eric Nixon began his career in 1982 at Non-League club Curzon Ashton from Ashton-under-Lyne in Greater Manchester. In December 1983, he signed for Manchester City having walked in off the street and asked for a trial! He made 84 appearances in 5 years at the club, and was sent out on loan 5 times. And it was with 4 of those loan spells in the 1986–87 season that he achieved the rare distinction of playing for a club in all 4 divisions of the Football League in a single season.

Eric Nixon signed for Tranmere Rovers permanently in July 1988 going on to 432 appearances, including 333 league appearances over 9 years, and was with the club during their rise from the 4th Division to the 1st Division play-offs in 1992–93. In the 1988–89 season he kept 25 clean sheets, which still stands as a club record for the most clean sheets in a season.

Eric was also a part of the team that won the Leyland DAF Cup in 1989–90, beating Bristol Rovers 2–1 in the final at Wembley. He was part of the Tranmere Rovers golden squad, playing in a time during which the team reached the Coca Cola cup semi-final in 1994 and the play off’s to reach the Premiership for 3 consecutive years.

In 1996, Nixon was sent out on loan three times. In January he joined Reading; the following month he was loaned to Blackpool, for whom he made 20 league appearances; and in September he spent a second spell at Bradford City, making 12 league appearances.

In August 1997, Nixon was signed by Stockport County. In 19 months he made 42 league appearances, & he was also sent on loan again, this time to Wigan Athletic in August 1998, before signing for them permanently in March 1999 on a free transfer. However, his time at Wigan was short-lived, and in July he was back at Tranmere Rovers for a 3rd time, on another free transfer, where he stayed for a further 4 years, becoming a part-time goalkeeping coach. After focussing on coaching, Nixon spent a short loan spell at Kidderminster Harriers in October 2001,for whom he kept 3 clean sheets in 3 games. On his return, he signed non-contract terms with Tranmere.

In August 2002, he again signed as a non-contract player with the club to provide goalkeeping cover. The 2002–03 season was his testimonial season & his testimonial match was played at Prenton Park on 6th August against Manchester City.When he played in goal against Crewe Alexandra in September 2002, Nixon became the oldest player to ever play for the club.

Nixon’s final club was Sheffield Wednesday, for whom he signed on a free transfer in July 2003, and where he was used as a goalkeeping coach, making 1 league appearance — on 27 September 2003 against Grimsby Town. His spell with the club was spent coaching 3 days a week, and spending 2 days back at Tranmere Rovers coaching.

He has played several times at charity Soccer Six events and at masters football tournaments representing both Manchester City and Tranmere Rovers. In 2012 he released his acclaimed autobiography ‘Big Hands Big Heart’ and completed several book signings at some of his old clubs and several outlets of Waterstones. In July 2012 Eric Nixon became new goalkeeping coach at Macclesfield Town FC. Following a successful spell with Macclesfield, Eric joined Chesterfield FC as their goalkeeping coach for the 2013/14 campaign.

2007 – Honoured for outstanding service to Tranmere Rovers as winner of the Dave Russell Award at the annual Liverpool Echo Sports Personality Awards in Liverpool.